An Adventure in Education

As Sandra walked into the kitchen the morning of our last day on trek wearing her backpack strutting proudly that’s when it hit me. We weren’t there just to see how other people live, or to experience another country, but to build a school so that Sandra and Maria can get the education that most of us Americans take for granted.

The Community of Las Mercedes

The community we visited is roughly a 2 hour drive from Managua, Nicaragua and is nestled among the coffee plantation of Las Mercedes. The coffee grown there is sold to roasters and distributors around the world.  The community is made up mostly of the workers on the plantation and their families. In addition to the workers, a local farm and small coffee grower nestled within the larger plantation lives there along with his extended family. The farmer and his family welcomed most of our group into their homes while one of the workers provided food and shelter to my Husband and myself for the few nights we were there.

The people there are extremely happy, and very passionate about improving the community within. The Mayor himself convinced the folks at buildOn to build a school so that the children of the community wouldn’t have to walk the many miles they do now to the school just outside of the plantation. The roads (as we discovered) are very treacherous, and even more-so during the rainy season. In our home alone, Santos (one of the sons) was already attending school and could read and write, while his sisters would stay home with Mama (Barbara).
It’s About the SchoolOur first day we were welcomed with open arms and lengthy speeches by the son of the farmer and others. Dressed in a pink baseball cap and pink shirt, Juan Carlos thanked us for providing them with a school closer to the the community so that more of the children could attend. The farmer that is nestled within the plantation provided a bit of land a shorter walk down the roads on a beautiful hillside. The Father of the well spoken Juan Carlos is a very quiet man and I could see immediately that he was a very kind soul who cared deeply for the community.

As I quickly scrambled to raise the money to put towards the school my overall driving force was not just the school, but the opportunity to travel abroad. I was excited about being a part of something greater while experiencing a culture that was foreign to me. Everything happened so quickly – the raising the money in just a few short weeks, getting my travel inoculations, reading about the history of Nicaragua, getting things in order at the office so that they could fair without me for a week, and the usual to-do’s that life was throwing at me that I didn’t stop to really think about what it was we were really doing. 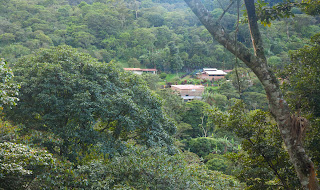 Post surviving the long journey to Nicaragua via El Salvador, the questions for our trek guide Danielle were more about what our itinerary was, who we were traveling with, and so on. We waited for a few of the folks that arrived a day early to spend time exploring the country. The two Fathers and their daughters joined by a friend of one of the girls had stayed at the Hilton a couple nights before and visited the volcano that day. We were awaiting the arrival of two of the girls from Basha that were primary in raising money for the school, and were expected to sync up with the rest of the group upon their arrival. I have to admit that the thought of spending more time in the country did cross my mind, but as my Husband and I discussed, we were there to serve a purpose, and that purpose was to build a school.

Our long journey into the mountains began after we convened with the rest of the group and then continued the next morning after a night’s stay in an Inn in Madagalpa. When we arrived at the community the welcoming and introductions began and we were asked to speak to the community. I looked at Danielle and said “Are you going to speak?” to which her response was “This is YOUR school. You guys raised the money to make this happen.” At that moment my mind spun. I looked into the people standing before me. People that were so hungry for knowledge that they convinced this organization to build a school here. Here is where the children were already limited and had to walk so far in order to learn how to simply read. The “Thank You”s and the welcoming from the “Parents of the community” (as they had put it) were so overwhelming. I jumped to the thought of my first school. My Mom shoving me out the door as I reluctantly got on the bus. I was terrified (have I mentioned I was a shy child?). Cut to my future years in middle school where I had given up on education. I hated Math, Science, Reading, and all that in-between. I fought with my Mother to avoid reading. She tried everything from bribing me with pennies to quarters per page read, and even tried to convince me to do workbooks in the summer time as all I wanted to do was play on the beach. I stuck my middle finger up at my teachers in High School and told them flat out that I was not going to class. Why? Well, I didn’t see the point. Why did I need to learn Math? What was the point of reading stories that didn’t relate to me?

After spending time with our host family I got to know the two girls Maria and Sandra, and their brother Santos. That first night I could hear a young boy (Santos) reading to his Father. My Husband brought it up the next day that he could clearly tell that Santos was reading as Tenacio asked him questions and encouraged him to continue. The next day after we had gotten back from the school worksite, Maria brought out what looked like a workbook. There were a few words in Spanish at the top of each page and handwriting below repeatedly. Maria pointed to the words and said them to me “au, ai, ay, io, iu” and so on. Our second night there the girls and the oldest Brother were watching us get ready for bed. Given the lack of being able to communicate due to our language barrier my Husband and I were constantly looking for things to do to interact with the family as much as possible. My Husband pulled out the book he had picked up for me to give the family as a gift upon us leaving. He asked if I wanted to show it to them as I quickly grabbed it out of his hands.

I sat down and waved for Sandra to come over. Maria and Sandra stood next to me as I showed them the book. The oldest boy went outside to get Barbara (Mama) as Maria looked at the book and read “El árbol Generoso” (The Giving Tree) Maria said. I didn’t have to read it for her at all. I then showed her a couple of the words after and she struggled with them, so I began to read to her. Before I knew it I was half way through the book and looking up to the entire family peering at the book as the oldest boy held the Flashlight for me to see. They laughed as I struggled with the longer parts (I had never read Spanish before), and eventually handed it to my Husband who knew a bit more Spanish that I had. When he finished the book, the oldest boy simply said “Bonito” (Beautiful). I learned the next day what bonito meant, and used it often as the days followed.

The third day I had become even closer with the youngest Sandra. She was showing me her clothes she had – bringing out a shirt, then a shirt and skirt combination, followed by her dress shirt to wear for her new school. I showed her pictures of the school being built on my digital camera display. Mom watched with proud eyes as we showed her the pictures again as well as the video taken as we built the school on the hillside. The last night there we gave our gifts to the Family thanking them for their hospitality. My Husband gave Barbara a headlamp so she would stop pinching her flashlight in her neck to see while she cooked. I presented the book to the girls and said to them “This was my favorite book as a child, and a book I often read to my children. Promise me you will learn how to read it.” Barbara looked at me with grateful eyes, and the girls quickly grabbed the book from my hands. That night my Husband and I heard Santos reading the book to the girls two times through.

All of those moments leading up to the last morning of Sandra waltzing around with her backpack on, and showing me her clothes for school really got me to hoping that these two little girls will get to go places. I remember a friend I had met years ago that grew up in a small African village. She had snuck her way into school, then later traveled to the city and put herself all the way through the University there. She eventually traveled to the United States and was, at the time I met her, a nurse. I hope that Sandra and Maria realize that the sky is the limit and it all begins with learning to read. I am grateful to Basha High School for working so hard to raise the majority of the money, to my Husband for putting so much effort in with his students to work towards the school, and am happy that I was able to look into Sandra and Maria’s eyes and know that they now get an opportunity that I myself had once taken for granted.