I was so nervous about my 4 hour layover in El Salvador than the entire week trek in Nicaragua to build a school. It was my first time traveling outside America aside from my drives from Seattle to Vancouver Canada or the ferry rides to Victoria B.C. and my one trip to Mexico over 10 years prior. This was going to be different, a trip into Nicaragua – Central America – into a place that isn’t Americanized for tourists. I didn’t know how much English they would know, or if they would even be accepting of this blonde American woman. At least in Nicaragua the rest of the group would be there in the same boat I was in with regards to the language barrier, but El Salvador I was on my own. Friends tried to ease my anxiety by saying things like “You’ll be int he airport, and most people speak English in airports.” or “Don’t worry, the signs will be in Spanish and English too. You will be fine.” So I eased myself into this with the same positive thoughts over and over in my head.

My Driver dropped me off at the San Francisco International Airport. Flying on Taca Airlines I found the location for me to check in and check my bag. I had to show my passport to a man before I got into line to check in, and then again when I checked in with my bag. The woman was very nice and spoke perfect English, and wished me well on my flight. She advised me to hold on to my Passport and keep it out with my ticket at all times.

My First Indoctrination into Spanish

Sitting at the gate I found myself surrounded by people that spoke primarily Spanish. I felt like I was in a portal taking me from one land to another. That portal was projecting me from being the majority to a minority as an English speaker. I managed to stick in my travel “bubble”, and whipped out my tablet to draft up a quick blog post about the travel from San Francisco, through El Salvador, and on to Nicaragua. There were some men laying on the floor charging their various devices and listening to Frank Sinatra out loud. They would speak to each other in Spanish, and then switch to English here an there. I was able to make out some of what they were saying, and as I found myself watching them one looked up and smiled at me. I smiled back, and got back to blogging.

The stewardess was a bit grumpy when it came to speaking English, but the Steward that worked with her was extremely nice. He always spoke to me in English and was checking to see if I needed anything frequently.

Landing into El Salvador was fun. Looking out the window it looked like a scene out of one of those action movies where the plane lands on a small airstrip surrounded by jungle. I stepped off the plane and knowing I had over 4 hours to familiarize myself with where my gate was I walked off the plane and walked to the right. Quickly walking to the end of the airport, I turned around and walked the other direction. I noticed that prices were in what looked like American dollars. I had a bunch of american cash with me, but didn’t spend the time to exchange it for El Salvador money of even Nicaraguan. I saw a restaurant that had the word “wireless” in the sign. It was perfect for me. A place to park my rear for a while and see if I can communicate with the rest of the world on my tablet. I asked the woman at the front if she spoke English. She nodded no, and then walked away from me. There was a man on the phone, and i waited for him to get off the phone to ask him to be seated, or possibly if he spoke English as well. He took a very long time, and the woman ca,e back and stood next to him and not looking at me at all. I felt like I was getting shunned as the crazy American tourist, so I walked away. I found a nice little spot a few more feet down towards the other end of the airport, asked them if they spoke English, and the nice guy there said “a little” and seated me. I managed to order a bagel with eggs and an orange juice, eat, and then pay my bill without feeling too uncomfortable. I still felt a bit alone since I couldn’t engage with the people there as I usually do when dining alone.

As mentioned in my blog post while in El Salvador, I managed to find a cafe and ordered a Latte. I mostly pointed to what I wanted reading what things said on the menus and boards. Really enough to just get me by for the next few hours there.

Getting on the plane was a lot harder than I thought it would be. The Spanish and then English they spoke on the way down wasn’t as efficient flying out of El Salvador to Nicaragua. There were 3 flights leaving out of the same gate all around the same time. One man came around and asked people if they were flying to Managua Nicaragua. I saw him ask a group of men in Spanish and then myself, as they said “si” and myself “yes”. So I stuck with what those men did. If they got up when the announcements came I got up. Where they walked, I walked. It got me through a very confusing boarding process, and I’m thankful they didn’t either notice or care that I was following them.

Once in Nicaragua I was connected with my trek coordinator Danielle was American, and spoke perfect English and some Spanish. A young woman with black hair arrived later. That was Alex, or translator. She is from Nicaragua, and would be helping us communicate with our host families and the workers for the rest of the week. Alex and I got to talking and she asked what I do for  living. I mention I am in Marketing (easier to say than trying to explain SEO or Social Media). She asked “what kind of Marketing” to which I replied “Online, or Digital Marketing” She asked “like…?” so I explained “Search Engine, and Social Media type of marketing.” She says “oh yeah.” when I asked her what she does she said “Adwords”. So, here I was in a completely different country and the first local I meet is in the same line of marketing I do. How crazy is that? 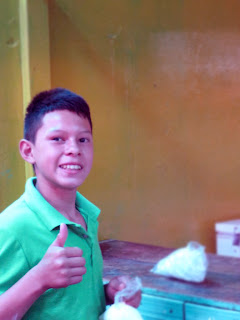 After we grouped and headed into the town of Madagalpa it was a fund 2 hours drive listening to 80’s music (you know, Tina Turner, the Bee Gees, Whitney Houston, and the like) with Danielle in the front partially speaking to Danilo (our driver and the official trek coordinator in Nicaragua) in English and Spanish. Having Danielle and Alex with me made traveling through the country seem pretty easy. I was relaxed and having a lot of fun along the way.

The next day we headed to the market as a group to buy work boots. I had already purchased mine and brought them with me so I wandered around with my camera taking pictures. I didn’t understand anything the people were saying, but they loved getting their picture taken. I even got a thumbs up from a boy bagging cheese for sale.

Alex was helping the other communicate as they bought boots, and Danielle talked with vendors to purchase fruit for us to enjoy for lunch later that day. The people were nice, the market was booming, and I got a lot of great pictures while there. But I was yet have the need to try to communicate with anyone.

While in the village we found it very difficult to communicate with the family we were staying with. My Husband worked as best he could with the man of the house to tie up our mosquito netting, and to get the latrine build completed for us to use (where they went to the bathroom was unknown to us). Waking up mornings to them all watching my Husband and I get ready in the morning. Puzzled at our rituals of washing our face and brushing our teeth. Dinner was a series of hand gestures and the children laughing as we struggled to eat our rice and beans with tortilla the way the locals do (I still haven’t quite figured out what you’re supposed to do).

Somehow, though, despite not speaking any Spanish we found a way to communicate. With tearful eyes and long hugs when we left, it was clear that despite the lack of communication verbally we still found a way to bond.